The different types of gingerbread in Germany also include the Printen. The typical shape, elongated stripes and the name come from Aachen. In addition to spices such as allspice, cloves, coriander and cinnamon, sugar beet syrup should also be used. In addition to the classic spice prints, there are also numerous other variants such as fruit, nut and chocolate prints. Like all gingerbread dough, potash is used as a leavening agent, which only develops its leavening force from 50 degrees. This allows the dough to mature for a long time in a cool environment.

In the 15th century numerous gingerbread makers and brass foundries came from Belgium to the city of Aachen. The brass foundry also made magnificent sheet metal molds for the gingerbread biscuits, among other things. These pressed – “prenten” / “printen” – the dough into these molds. This is how the name Printen came about. The expensive sheet metal molds were partly replaced by self-carved wooden molds. At that time, the Lebküchler still used cane sugar. But soon a substitute for the expensive cane sugar was found. When Napoleon was blocked from the continent, people began to think about the beet sugar they produced themselves around Aachen. But there was a problem: the heavy gingerbread dough became tough and did not come out of the mold well. The Lebküchler made short work of this and from then on did without the shapes. The dough was rolled out and cut into strips. 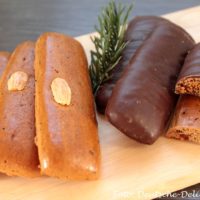 The Printen get hard in the tin cans. If you want it soft, just add a piece of apple to the can.

Recipe Elisen gingerbread
Elisen Lebkuchen are among the classics. They are wafer gingerbread. This recipe is without flour.
Open recipe

Recipe according to preference
Advertisement