It is impossible to imagine Thuringian cuisine without Thüringer Klösse made from potatoes. In the production they are very complex, however, are offered in Thuringia in almost every inn and also in the family there is it to the Sunday meal.

Grating including squeezing works wonderfully with a fruit juice centrifuge. Then continue as described. (Thanks for the tip to our user G.Adler)

Depending on the region, there are different names for it such as Klies, Grüne Klöße or Hütes. The term green dumplings refers to the raw potatoes.
The ingredients used are 2/3 raw potato mixture and 1/3 cooked potatoes and salt. The raw potatoes are grated, squeezed and only the dry potato mass is further processed with the settled starch flour and salt. Whisk the hot overcooked potato mixture into the raw mixture in batches. Then round dumplings are formed and left to steep in hot water.

The trick is to boil the dumpling water and porridge already before the raw potatoes are removed from the press. Otherwise, the dumplings get a dark color. To avoid this, the Thüringer Klösse are occasionally also sulphurised, which gives a perfect colour and does not affect the taste. Suitable for this purpose, for example, a knife tip Onewe (advertising). This is a preservative that is used, among other things, for the preservation of
Meat is served with it.

Remove from water and serve hot.

Recipe Fried dumplings use leftovers
Great dishes can be conjured up from the rest of the potato dumplings. 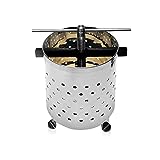 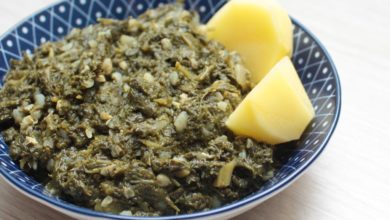 Kale as a side dish